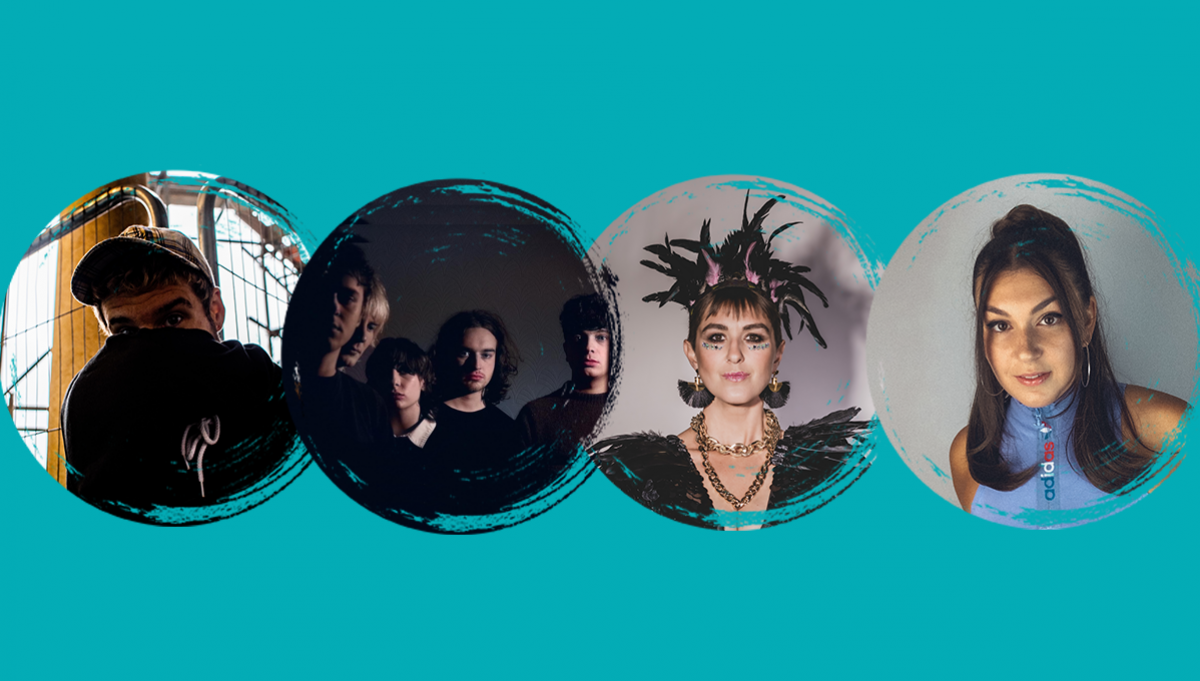 In affiliation with Roundhouse Rising Festival, Roundhouse Rising Presents is a series of music gigs showcasing hot and breaking artists. With a blitz of shows by artists of all sorts, be it post punk, krautrock or grime, we welcome new music lovers to discover the freshest emerging talents in our studio space. In partnership with Horizons/Gorwelion, a scheme delivered by BBC Cymru Wales in partnership with Arts Council Wales to develop new, independent contemporary music in Wales. Performances from an eclectic mix of talent from Wales: Minas, Clwb Fuzz, Tara Bandiito and YazMean

Minas is the project from Cardiff musician and producer James Minas.

His songs tell stories of a chequered past over a mix of deep melodic soundscapes and loud, aggressive stanzas. Covering subjects from personal struggles with mental health to finding a place in the society we have. Minas alongside his live band are garnering a reputation for their ferocious and lively shows and 2022 is set to be the most exciting year yet for them.

As a producer James is building a new sound around the South Wales scene and beyond with a number of artists spanning different genres, but as an artist he presents brutal honesty, going against his natural defences to present the most open and vulnerable version of himself.

Minas was born in Athens, grew up in the circus with parents who were heavily involved in the 1980’s Punk scene and then moved Wales as a teenager. Minas aims to create music that discusses these things and ends with an empowering feeling of hope, something we all need in right now.

Clwb Fuzz are Joe Woodward (guitar & vocals), Emily Kocan (bass & vocals), Hayden Lewis (guitar), Gruff Roberts (drums) & Cam Wheeler (synth & percussion). They are the new kids on the flourishing Cardiff scene, which is home to Buzzard Buzzard Buzzard, Boy Azooga and Perfect Body, among others, and their influences range from The Beach Boys and The Kinks to Smashing Pumpkins & Spiritualized, but all smothered in a fuzz worthy of Black Sabbath or The Stooges’ Ron Asheton.

The band’s previous single GOD (Let You Lose) came out late last year and picked up support from the likes of Huw Stephens (BBC Radio 6 Music), Emily Pilbeam (BBC Introducing) & NME, with the latter adding the single to their New Bangers playlist.

Tara started performing at 5 years old. The daughter of the legendary wrestler El Bandito, she descended into the world that we call entertainment, without the opportunity to wonder exactly why performing was such an integral part of her personality. She didn’t ask herself that profound question until 2009 after the loss of her father, her hero and inspiration, which led her on a journey, symbolic and literal, to discover herself and begin the journey of Tara Bandito.

Becoming a new artist on Côsh Records in December 2021, working with the producer Rich James Roberts, she recorded three singles which will appear on her debut album in late 2022. Her first single, Blerr, was released on 14 January 2022, with a supporting music video produced by Lŵp, directed by Tara. The single received wide attention after having a first play on Huw Stephens’ BBC Radio Cymru show, after which Tara made it on to Adam Walton’s Radio Wales ‘Welsh A-List’.

YazMean, previously known as Shawgz, is a Wales based rapper known for her stage presence and bold persona. Cutting her teeth as a battle rapper for Don’t Flop, YazMean soon turned her creative eye towards developing an identifiable artist brand creating her own artwork and using creative direction.

In 2018, YazMean released her debut EP BLK Tape on Bristol based rap and alternative soul label Issa Vibe which garnered the attention of BBC Radio Wales and Cardiff based collective Ladies of Rage.
​
In 2019 YazMean released several singles, including Nasty recorded at Da Beatfreakz’ studio in London following the winning of a KA Sessions competition. Nasty was later included on BBC Introducing’s The Hot List, selected by DJ Jaguar. The year 2019 also saw YazMean playing The Great Escape festival in Brighton, and support slots with the likes of Kae Tempest and the first all-woman UK Hip Hop Tour Queens of Art.

In 2020 YazMean received financial support from the BBC Horizons scheme to develop her new EP Vice City, which sees YazMean broadening her sound and experimenting with her cadence and flow. By incorporating current popular music trends and delving into her Sudanese heritage, YazMean has successfully created a fresh and individual sound on Vice City EP.