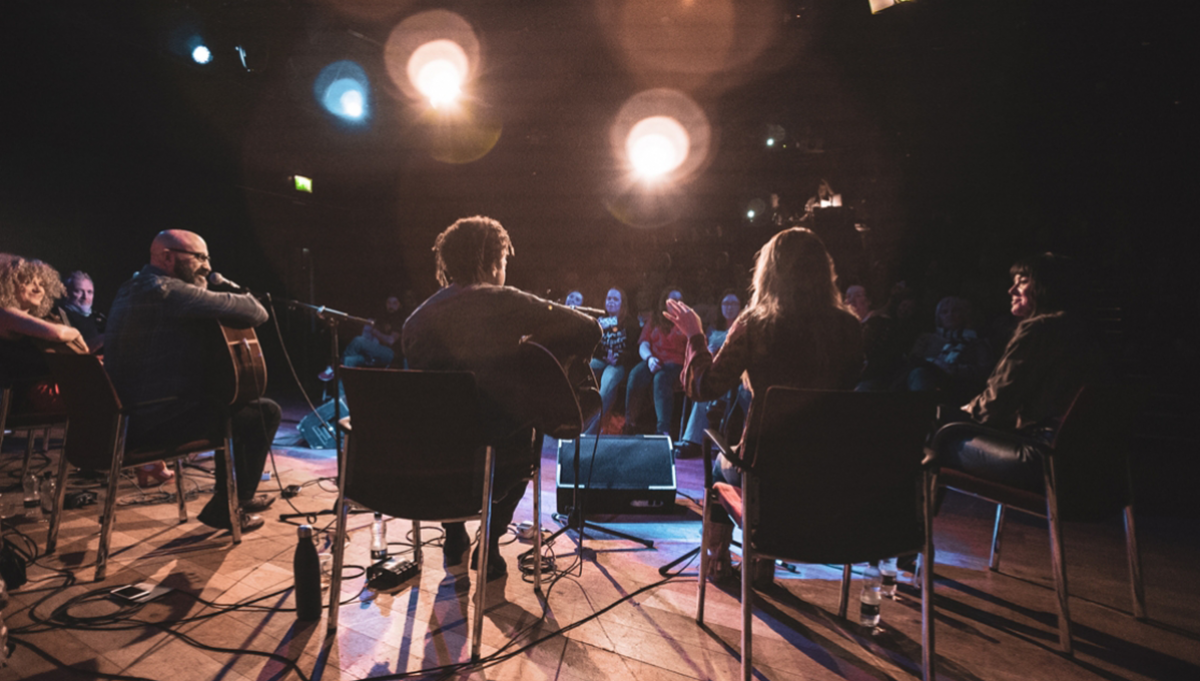 Celebrating the art of songwriting and International Women’s Day, hear the writers behind the likes of Corrine Bailey Rae, Jake Bugg and Macy Gray perform in their own voice, in a relaxed, acoustic showcase.

In this edition of Songwriters Circle, we will see The Wandering Hearts and Catherine McGrath plus a host of female songwriting guests come together on stage to perform and exchange songs and stories in celebration of International Women’s Day. The evening will be presented by hosts Riva Taylor and Jeff Cohen, and also feature a performance from Nina Sundstrom the winner of the ‘Strive’ songwriting competition held in lockdown to discover the best emerging songwriting talent.

Elton John: ‘Her voice and the quality of her songwriting are undeniable.’

Catherine McGrath is a Northern Irish Country Music singer songwriter signed with Warner Music. McGrath’s parents are both musicians and were frequent performers at the annual Fiddler’s Green Music Festival held in County Down, Northern Ireland. McGrath honed her skills by observing her parents on-stage and by watching instructional videos online. McGrath took up songwriting, and in addition to performing her own material, she began making homemade videos of herself performing current pop hits, which she then posted online and attracted the attention of her label. Her 2018 debut album scored a number 1 country chart positioning, and was supported by a headline tour as well as set at C2C: Country to Country festival at the 02 in 2019.

Laura Oakes is a two time-winner of best Female Vocalist at the British Country Music Awards. Oakes has enjoyed some of the UK’s most prestigious festivals and stages including C2C, The Great Escape, The Long Road, Cornbury and Camp Bestival. Her 2020 EP ‘How Big Is Your World’ was released as the pandemic swept the world but non the less received playlisting from BBC Radio 2 and pick up across Chris Country Radio. In this time Laura also asserted two radio shows, bringing the increasingly popular format of ‘The Round’ to the ears of the listeners.

The Wandering Hearts were discovered during their second ever rehearsal together, when they uploaded a recording to SoundCloud, and in less than half-hour had a manager. Soon after, they were signed to Decca Records after playing for the president of the label in her office, later going on to perform alongside the late Tom Petty and Stevie Nicks at BST Hyde Park, and receiving a personal invitation to Nashville to play with country music legend Marty Stuart. Their headline UK tour begins in May.

Jeff Cohen is a 5 Time BMI Award winning, Grammy Nominated Songwriter/Producer/Publisher based in Nashville. Jeff’s songs have been recorded by Sugarland, Josh Groban, Mandy Moore and Macy Gray to name a few and have featured on more than 20 million albums sold. You can hear some of Jeff’s cuts more recently on radio hits for Jake Bugg, Nell Bryden and The Shires, as well as on major commercials for Samsung. In a previous life, Jeff was a music executive at BMI working with such talent as Jeff Buckley, Spin Doctors, Kara DioGuardi, Ben Folds, and many more.

Riva Taylor is an English singer, songwriter. Her latest two part album This Woman’s Heart encapsulates a coming of age for the artist who was the youngest signing to EMI records. Featuring production collaborations with Jakwob (Celeste, Little Simz, Charlie XCX) as well as Radio 2 favorite If I Could Ever Stop Loving You, it’s songs have been supported by Clash Magazine, Sir Elton John and showcased at British Summertime Festival.

Under-16s must be accompanied by an adult.