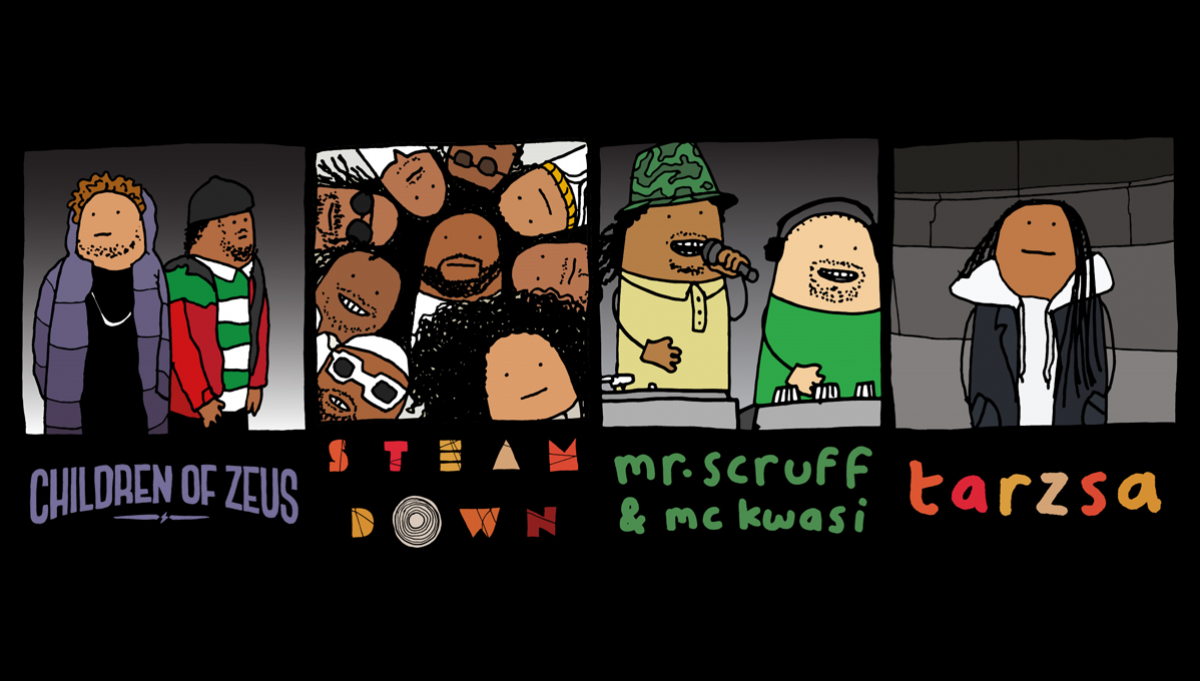 A massive get together! Manchester meets London at this 6 hour session featuring Tarzsa, Children of Zeus, Mr. Scruff, Steam Down & MC Kwasi.

Manchester’s Tarzsa has been making quite a name for herself over the last few years through her soulful & technically superb DJ sets & NTS radio shows. She will be setting the pace early on, warming up this incredible venue for an act who don’t really need an introduction, but here goes..

Children of Zeus touched down in 2017 with their anthem ’Still Standing’ and heave never looked back. By that point they were already individual veterans of the Manchester music scene, and have since been steadily releasing classic forward thinking hip hop soul music. Two LPs later, their focus and a refusal to play the game has resulted in a deep back catalogue that at once unites the soul traditionalists & the bang up to date futurists.

Varied and eclectic with a truly charming sound, there are few who can do it like the man himself. Mr Scruff’s sets have set the bar for some of krankbrother’s favourite shows over the years and it was always a question of when, not if, he could come back. Drawing on a multitude of influences, the acclaimed record producer and DJ flits between soul, funk, jazz and reggae to hip hop, house and disco – the list of genres is endless! Mr. Scruff will be taking to the turntables to join the dots between CoZ’s heavy hip hop soul and the second live act, who will be representing London.

Formed in 2017, the Steam Down collective have built up an incredible momentum over the last few years via their weekly jam night in Deptford, and taking their high energy collective spirit around many gigs and festivals. Their recent 5 track EP served as a bit of a teaser, but if you haven’t caught them live yet, get ready! After Steam Down have wiped the floor with us, Scruff will once again be hopping on the decks to finish off the night & rinse every last remaining ounce of energy from the dance floor.

Our host is the irrepressible MC Kwasi, a fixture on the Manchester club scene since the early 1990s, and he was sharpening up his sound system skills way before that. The original smile factory in full effect! What all these acts bring is a wealth of experience and history, connecting the past with the future in a way that creates an intensely enjoyable journey through music.

Let’s lift up & celebrate these amazing acts and each other as often as we can. This is a proper celebration of our scene and we expect everybody to get involved!