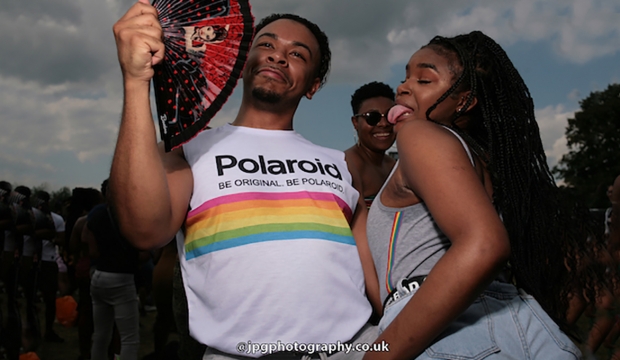 Blanguage is a lifestyle brand curating audio, visual and physical experiences through podcasts and playlists, live events and merchandise and digital articles – they’re part of the Roundhouse co-working hub. Blanguage is about the celebration of our culture, a culture that is inclusive and can be enjoyed by everyone. Isaac from Blanguage discusses the importance of Black Pride.

In August 2005, three Black lesbian women organised a social outing to Southend on Sea, which quickly grew to several bus loads of women travelling together to celebrate their identities. At those gatherings, discussion made it clear that a space was needed for queer, trans and intersex people of colour (“QTIPOC”) to come together and celebrate their identities, borne out of dissatisfaction with the inclusion and representation of QTIPOC in mainstream LGBTQIA spaces. In 2006 a steering committee was formed and UK Black Pride officially debuted on 18th August 2006.

UK Black Pride remains a highlight of the year to many with a space created by us, for us. UK Black Pride operates under the umbrella of political Blackness, a term which has been contentious amongst people of African descent within the UK. The term stems from the idea that all people of non-white backgrounds should unify under the solitary term “Black”. However, there are issues surrounding erasure of the specific experiences of African peoples by broadening the definition of Black, which is particularly prominent when Black people challenge the use of the term. Nevertheless, many Black people presume the event is for those of African and Caribbean heritage, which explains the majority Afro-Caribbean demographic. This is just one of the many challenges facing the ever-growing QTIPOC community as we attempt to flourish and make safer and celebratory spaces for our community.

Some of the newer issues within this space relate to lip-service-only allyship and people who do not identify as QTIPOC engaging in these spaces without consideration for those who it has originally been made for.

Despite the issues surrounding political Blackness, Black Pride has always been a space where QTIPOC were able to enjoy themselves fully, freely and safely. Some of the newer issues within this space relate to lip-service-only allyship and people who do not identify as QTIPOC engaging in these spaces without consideration for those who it has originally been made for. The reasons why Black Pride attracts the audience it does is because the need for spaces which reflect shared experiences, based on the intersections of gender, sexuality and race, creates more nuance for people to be understood and be fully liberated within.

To share moments in the parade with my BlackOut brothers felt to be included, to be understood. However, if they were not there, and as happens in non-QTIPOC spaces, I would have felt very isolated and culturally excluded. From the music to the food, cultural representations of people of colour, specifically Black people, are a necessity for our communities to flourish. When an impromptu electric slide took place in the late afternoon at UK Black Pride, I felt at home – a testament to the brilliance of the African diaspora.

From the music to the food, cultural representations of people of colour, specifically Black people, are a necessity for our communities to flourish.

Black Pride is a positive, forward moving space which encourages Black (African-Caribbean people) to celebrate and be true to themselves. The potential for the deep-rooted joy it can bring is limitless. The attendance of both cis-heterosexual and white queer people is constantly sparking questions of who is an ally and who is simply there to observe a culture, without showing it any reverance or respect, without truly having a desire to understand the experiences of these people as written by the people themselves? It seems that both groups generally fail to understand that and how their growing presence has had an affect on the comfortability, safety and dynamic of the space, especially with this year’s attendance hitting the 10,000 mark.

UK Black Pride is one of the UK’s most inclusive spaces and that is the beauty of it. It is part of our role as community members to be mindful and resist the culture of ignoring the inherently political nature of spaces just like these, to ensure that we keep these spaces safe for those whom it was built for. What we would not want is for this to become yet another space where Black LGBTQ people feel like strangers within the very homes they have created.

On Sunday 7th July, Haggerston Park was filled and buzzing with the energy of many years before, even with all of the politics flying around. We hope that we can continue to encourage a legacy of joyous moments like such whilst being aware of the critical issues that our community, and others, face on a daily basis.