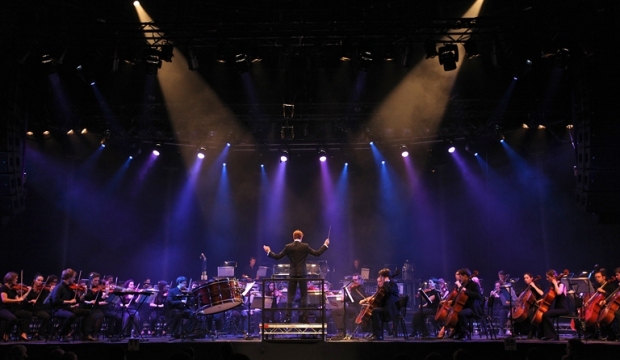 Multi-award-winning composer and audio specialist Nick Ryan introduces Synaesthesia, his new piece of work composed for the LCO, commissioned especially for Imogen Heap’s Reverb as part of Bloomberg Summer at the Roundhouse.

For a long time, I’ve been wanting to compose a piece for string orchestra and electronics about my experience of ‘Synaesthesia’. As many as 1/23 of the population experience some form of Synaesthesia, a condition in which stimulation of one sensory or cognitive pathway leads to automatic, involuntary experiences in a second sensory or cognitive pathway. In the most common form of synaesthesia, ‘Grapheme-colour synesthesia’, individual letters of the alphabet and numbers (collectively referred to as graphemes) are “shaded” or “tinged” with a colour, in either the ‘minds eye’ of the subject or actually within their visual perceptual field.

I experience a different form of Synaesthesisa known as ‘Sound-to-colour Synesthesia’ or ‘Chromesthesia’ in which sounds automatically and involuntarily evoke an experience of colour in my imagination. In my case, this perceptual relationship is ‘bi-directional’, in other words, I see colours when I hear sounds but also hear sounds when I see colours. This experience has deeply influenced my work as a composer which almost always involves the interpretation of images into sound and music.

The piece, taking these ideas as a theme, obviously needs to be an ‘audiovisual’ experience in order to communicate ideas about the profound cognitive and sensory relationships that exist between a sound and an image.

So I’ve invited the extraordinary visual artists Quayola & Sinigaglia to collaborate with me to create a composition which is simultaneously seen and heard. I plan to interpret visual textures, colours and forms created by Quayola & Sinigaglia into detailed and elaborate sonic equivalents. As I compose the score, Quayola & Sinigaglia will also respond to the music, working closely with me and the LCO, to create computational visual systems that transform the sound produced by the 35 players (live, as they perform the score) into a dramatic visual narrative.

Join Nick Ryan and the London Contemporary Orchestra for Synaesthesia on Saturday 23 August, part of Reverb 2014.