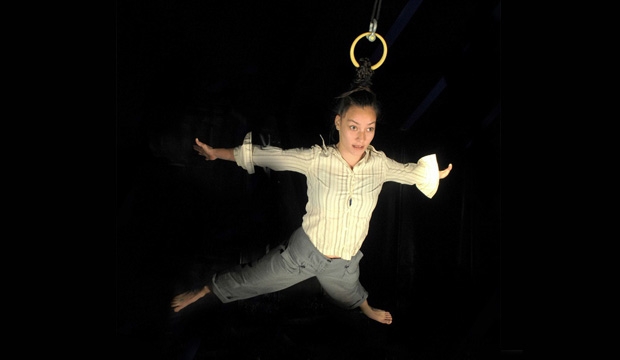 When Sanja Kosonen (a wire-walker) and Elise Abonce Muhonen (a trapeze artist) resolved to make a show together they chose to put their old disciplines aside and to learn something new: the art of hair hanging.

Presented in traditional circus as a feat of spectacle and amazement, in Capilotractées the artists explore instead how this skill can touch emotions – what it makes us think, what it makes us feel.

What sort of sensations do you experience when you hang from your hair?

Elise: I think the experience starts when we do the hair before the show; there are a lot sensations already in the preparation – to have the hair pulled together and pulled really tight; it’s something we can remember from when we were young and our mothers tied our hair.

Sanja: We have to start two hours before the show to do the hair for both of us, and it’s like a concentrated moment when you have to be really precise – because if we miss it we can’t do it. If it pulls from one point it can be painful or even dangerous, so it really has to be the perfect hairdo. If we miss it we have to redo it, so we take a lot of time and quite often close the doors and let no one come in. It’s almost a kind of secret meditation preparation.

Elise: And then when you hang it’s… well there are different things at the same time. First it changes the face – like there’s a kind of face lift as the hair takes the weight.

Elise: And after it’s the neck with all the weight of the body, so you have to build up the muscles of your neck and your upper body and back. Sometimes you can hear it cracks the spine. 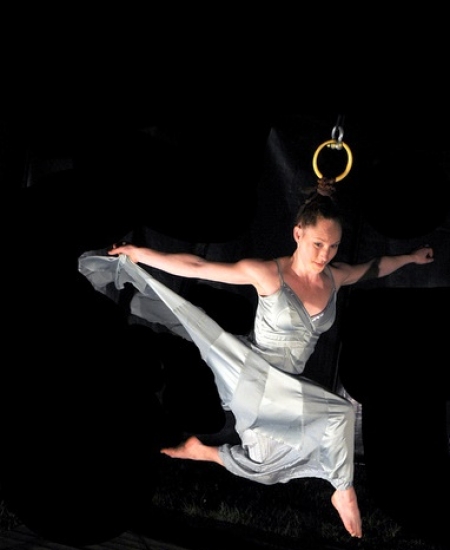 How did you train the skill?

Elise: Just to learn how to hang took us two years, so it was a big project. It went forward slowly as we had to train our muscles little by little, but what was interesting was that, in contrast with our other disciplines, we didn’t learn the technique at a school. We had to do it by ourselves because no one can teach you how to hang from your hair. It’s a secret how to do it, and in the traditional circus it’s handed down from mother to daughter or within the family; they’re very strict about it because it’s their way to earn a living.

Sanja: We tried to contact people who had done hair hanging, over Facebook or in other ways, and we collected some small pieces of information – that the hair has to be wet when it’s prepared, that it has to be bound, that it makes a lot of noise when you tie it, these kinds of things. I also went to the circus library at the Centre National des Arts du Cirque in France to look for books and old films about hair hanging and there’s not a lot – you can find a few images, but there’s really not much information about it. It’s quite amazing that it’s so rare but that it’s something that has always existed in circus.

Elise: Once we’d collected all the info and material we could, we had different rehearsal periods and we met in different places in Finland. Right at the start we bought a pull-up bar and set it up in Sanja’s apartment and started to hang from that. We’d time ourselves: three times five seconds, then seven seconds, ten, fifteen, three times fifteen, and so on. And the more we did it the longer we could hang. 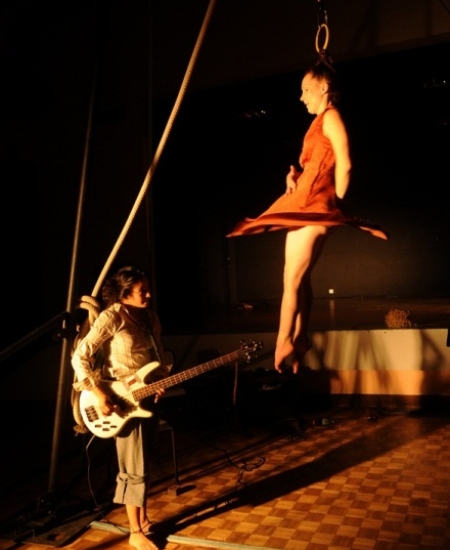 What made you want to learn the skill and create a performance around it?

Sanja: When I was around seven I saw a traditional circus in Finland, Sirkus Finlandia, and there was this girl hanging from her hair. It’s one of the oldest and the only things I remember from circus back then – a childhood story, a memory. And it really amazed me – I remember the feeling that I didn’t believe it was real, that there must be some wire somewhere because it was not possible. But you saw it in front of your eyes, and for me that’s something I always really admire in circus – when I see something where I feel I can’t really believe my eyes. So there was this fascination from childhood for this discipline.

Elise: And I think also we’d both been working with our hair in different ways in our disciplines before the hair hanging – using the hair as an element in our work. Hair is something really powerful and there are a lot of stories and histories behind hair. So it spoke to me in another way – as a circus discipline, but also as something that’s important in people’s lives. Many times when people cut their hair it’s because they’ve made some kind of big change; it’s a strong thing.

Sanja: And I think that’s also why there is a strong reaction when you say you’re going to hang from your hair – because the hair is something so intimate for women. It’s something beautiful, so you should be careful with it. The more we got into hair as a theme the more we saw how important it is. 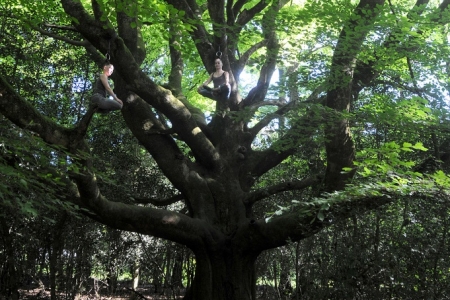 As you were training the discipline how were you starting to create the show?

Sanja: We had a lot of different methods; it was more like we were finding the method as we trained the hair hanging and started to make the show. I think that’s one of the questions we pose with this performance: what is circus today? It’s not really about a method or a technique; you can have a method to create a single act, but today circus can be anything and you can use any method you want. It’s a strange and really interesting thing to make a circus show today.

Elise: When we started to do the show we decided to try to make it funny because in a way just the image of someone hanging by the hair is quite hard, quite violent. So we decided that as it’s so absurd anyway to hang from your hair that the show had to be funny in some ways also. In the beginning we were also talking about how we wanted to make something that had a sort of Finnish character – we wanted to express ourselves in small ways, and to just be what we are and not to play so much with character.

Sanja: Again it’s a lot about circus as well because circus is something honest: someone doing a salto is really doing it, they’re not pretending to do it. There’s something about that also – I think the minimalism comes from there as well. We wanted to see what is the essence of the thing, the hair hanging. When you see these traditional numbers suddenly the girl flies up and she’s spinning around really fast, and it’s beautiful because she’s flying… but we wanted more to show first the reality of what happens when the body is lifted – show the audience what happens physically. It’s minimalism; it’s more in the details, more in concrete things.

When people come to see our show they’re like, Yeah that’s cool, you hang from your hair. And then what? Then what are you going to do? So I think that was the challenge for us also – to try and figure out how we could make a one-hour show with only hair hanging. As much as possible we try to keep it a secret what happens in the show, but I think it surprises the people that go. There are a lot of ideas we didn’t put in the piece, and there are a lot still to find out. Often when you think you’ve found everything and that you can’t do anything new there’s actually a lot behind what’s obvious; you just have to have the courage to look beyond.